After banning PUBG in several places, Google has now blocked the popular video app TikTok from Google Play Store following the instructions of the Madras High Court in India. It means that any Indian user from now will not be able to download this app from the Google Play Store. Let me tell you that the High Court has dismissed this Bytedance company’s application. The company requested to finish the ban from the TikTok app.

The Madras High Court had told Krend on April 3 that they banned TikTok. The main charge on TikTok has been that this app is serving adult content. It has a bad effect on children. A person had filed a PIL in this regard. According to the news, the Center sent a letter to Apple and Google asking for it to follow the order of the High Court. This letter was asked to batch TikTok. After this order Google has now banned TikTok from its Play Store. Google says that he does not want to comment on this app. But this app is banning the order of the court.

TikTok, a user-generated video sharing app from a Chinese Publisher ByteDance, was found encouraging explicit content in India. Recently it was fined $5.7 million for violating Child Protection policy by the FTC in U.S.

Yesterday, India’s main digital communications regulator, the Ministry of Electronics and Information Technology, ordered Google and Apple to remove the TikTok app from Play Store and App Store. This will not impact the users who have already installed the application. The users will still be able to download it from the source outside Play Store.

In my opinion, TikTok must be completely banned. There are many reasons, including the cringy content they make. 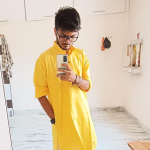 I am Piyush Suthar, a Blogger, YouTuber, Developer, and a Tech Enthusiast...I am from India... Having 3 years of blogging Experience and a self-taught Developer...